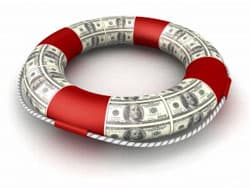 What Is Overdraft Protection

When you have a checking account, you have withdrawals and deposits out of and into that account. Should you ever withdraw more money than you have in your account, your purchase or check will be declined, unless you have overdraft protection. With overdraft protection, the bank will allow you to take more money out of your checking account than you have in so that the purchase goes through. All you have to do is make a deposit into the account so that your negative balance becomes positive again.

The crazy thing was, many times you didn’t know you overdrew your account until you logged into your account or you received a letter from the bank a few days later. Because of this, many people incurred a handful of overdraft fees.

And these overdraft fees add up. A 2007 study by the Center for Responsible Lending said consumers paid $17.5 billion in overdraft fees annually. That is some serious money.

Why Opt-In? The Advantages

So why would you opt-in to have overdraft protection? There are a few reasons:

Why Not Opt-In? The Disadvantages

Of course, there are reasons why you shouldn’t opt-in for overdraft protection:

Shop Around For What Fits You Best

For example, some banks allow you to link your savings account to your checking account. Should you overdraft your checking account, the bank will draw the money needed from your savings account. I’ve found that of the banks that offer this, some still charge a fee for this while others do not. SO even if your bank offers this, make sure you confirm they still will not charge you for overdrafting your account.

Additionally, some banks offer lines of credit instead. I bank with Capital One 360 which does just this. I applied and received a $1,000 line of credit on my account. Should I ever exceed my checking account balance, the bank will loan me the money. I then pay interest on the overdrawn amount for every day I have a negative balance. I overdrew once and at the end of the month, they debited my account for the interest I owed them. In that time, I paid $0.39 interest.

If you do decide to opt for overdraft protection, what are some ways you can ensure that you avoid making a regular occurrence that you use it? Here are 5 ideas for you.

Live Within Your Means: Not living within one’s means is the main reason most people get into debt. So, when it comes to avoiding overdraft, nothing can beat this age old advice. It’s not hard to live within your means if you have a sound budget. So, create a budget based on your monthly income and try not to exceed its limits. Make sure that you set aside some money in your budget for savings and emergencies so that you will have the money readily available in case an emergency occurs.

Follow Your Budget On The Go: While having and using a budget is great, you have to know if you are OK to spend while on the go. For this reason, make sure your budget is available on the go. Many programs, like You Need A Budget have a mobile app so that you can check out how much you have to spend any time you want. And if you are old-school and use an excel spreadsheet to budget, be sure to put it in Dropbox and add that app to your smartphone so you can check on while out and about.

Ask Yourself If You Really Need Overdraft: Before applying for an overdraft or withdrawing the overdraft money from your ATM, stop and ask yourself whether or not you really need the money. Many times, we can solve our financial problems without borrowing money. For example, you can ask your creditor for a time extension, ask your employer for an advance or borrow the equipment (such as a laptop) you need from a friend rather than buying it.

Explore Cheaper Sources Of Funding: You can never rule out emergencies however careful you may be. But before resorting to overdraft, explore other sources of funding that are cheaper in terms of fees and interest rate. For example, you can ask a relative or a friend if they can give you a short term loan. If it’s your lucky day, they may even offer an interest-free loan for an indefinite period. Think of how other people without overdraft protection manage and you will find a way out.

Do Not Open An Overdraft Account: The most guaranteed way to avoid going into overdraft protection is not to have overdraft at all. When you do not have overdraft, there is no way you can overdraw your account. So avoid opening an overdraft account. If you already have one, consider closing it. This may inconvenience you for a while if you are use to overdrawing your account. But you will be forced to find other cheaper sources of funding in case of an emergency.

​Learn how to start building wealth in just 7 days! Get insider tips and tricks to make it happen fast!

8 thoughts on “What Is Overdraft Protection?”